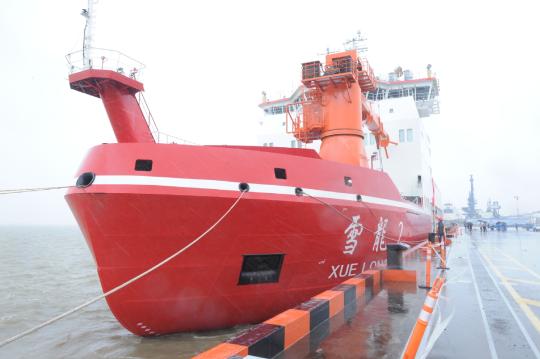 Xuelong 2 sets sail from its homeport in Shanghai for its first Arctic expedition, on July 15, 2020. (Photo provided to chinadaily.com.cn)

During the expedition that lasted 79 days and covered a voyage of 14,000 nautical miles, the team completed comprehensive observations of the atmosphere, ocean and ecology in the Chukchi Sea, focusing on addressing climate change and protecting the ecological environment of the Arctic.

Geographically, China is a "Near-Arctic State," one of the continental states that are closest to the Arctic Circle. The natural conditions of the Arctic and their changes have a direct impact on China's climate system and ecological environment, and, in turn, on its economic interests in agriculture, forestry, fishery, marine industry and other sectors.

Since 1999, China has completed 12 scientific expeditions in the Arctic, with its research vessels Xuelong and Xuelong 2 as the platform.

Most popular in 24h

LINE
Media partners: People's Daily | Xinhua | CGTN | China Daily
Back to top About Us | Jobs | Contact Us | Privacy Policy
Copyright ©1999-2021 Chinanews.com. All rights reserved.
Reproduction in whole or in part without permission is prohibited.
[網上傳播視聽節目許可證（0106168)] [京ICP證040655號]
[